Only days left until the
2022 Festival. 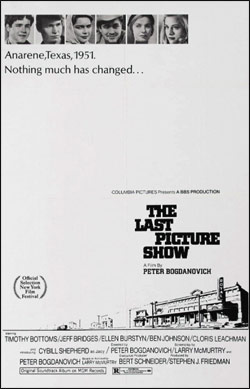 The handsome Duane is dating local beauty, Jacy (Cybill Shepherd), while Sonny is having an affair with the coach's wife, Ruth (Cloris Leachman). As graduation nears, both boys contemplate their futures. While Duane eyes the army and Sonny takes over a local business, each boy struggles to figure out if he can escape this dead-end town and build a better life somewhere else.

The Last Picture Show is an unfaltering masterpiece, thankfully re-released on its 40th anniversary. Adapted by Pulitzer Prize-winning author Larry McMurty and avowed cinephile Peter Bogdanovich from McMurty's novel of the same name, the film stands apart from its contemporaries, in ‘that 1970s New Hollywood era’, as one which effortlessly blends classic Hollywood filmmaking with the kind of restless anger and angst which typified other features of the period. The film opens, and closes, on the small-town cinema which has shown its last ever picture. The camera pans along the dusty, desolate street, establishing the dilapidated venues - a small diner and Sam’s dingy pool hall - in which our heroes will live out their last remaining months of adolescence. 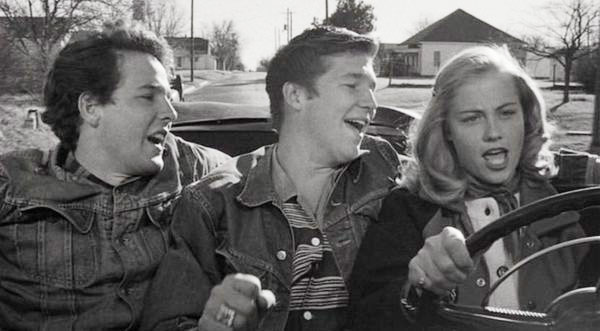 Timothy Bottoms as Sonny, Cybill Shepherd as Jacy, and an almost unrecognisably young Jeff Bridges as Duane, are on the cusp of adulthood in their senior year at high-school. As the film unfolds - in Robert Surtee’s daringly black and white visuals - the three youths struggle with the overbearing nature of the fictional small Texas town where “a person can't sneeze without somebody offering them a handkerchief”. The film’s gentle sense of humour offsets the bleak realisation the three are coming to: that they are destined to live the same failed, unfulfilling, and loveless lives as their parents, all of whom are wrapped up in their desperate unhappiness and unsatisfying extra-marital affairs. Pool hall owner Sam is the film’s sole moral compass, and his tender humanity forms one of the film’s most memorable scenes, in which he ponders his brief memories of happiness and love by the side of a desperate looking fishing hole, the camera slowly tracking in as his sombre expression fills the screen.

In fairness, the film is composed of countless perfectly-pitched scenes including Jacy’s strip on the diving board; Sonny and Ruth’s tense, initial foray into an adulterous relationship; the tender concern on Sam’s face when he says farewell to Sonny and Duane as they embark on a trip to Mexico; Jacy’s seduction of her mother’s lover in the dim pool hall. Each time Bogdanovich allows the scenes to play out in near silence as the brilliance of the lighting, staging, and acting leave the viewer breathless and trembling. The quiet, gently melancholy that infuses such scenes comes from the character’s desperate, failed yearning for some kind of fleeting happiness, as voiced by Lois (Jacy’s mother): “I guess if it wasn’t for Sam, I’d have missed it, whatever it is.”

Sonny and co’s desperate urge not to “miss it” leads them on several ill- advised adventures, crashing in to one and other as the folly of youth slowly descends in to an all together more terrifying malaise. The death and decay of this forgotten town, and its inhabitants, is Bogdanovich’s worrying elegy for the death and decay of the Hollywood he loved. The Hollywood of Welles, Ford, and Hawks. Of Becall, Bogart and Wayne. Bogdanovich’s personal and passionate portrayal of the burgeoning importance of television, and its subsequent effect on quality filmmaking, is to be found in the symbolic closing of the film’s rundown cinema, which ends the film playing its last ever picture - the Howard Hawks directed epic Red River starring, of course, John Wayne.

Mirroring many other ‘New Hollywood’ features, which themselves were influenced by post-war French and Italian cinema, there is little real narrative thrust to speak of. Instead, the film plays out as a series of episodes with which we get to relate to the young characters, who, along with the older characters, can often come across as unlikeable and frustrating but, most importantly, human.

The Last Picture Show features striking cinematography, powerful and engaging performances, a sparkling script and a fantastic Hank Williams infused soundtrack. But above all of this, it is the film’s inherent humanism, its desire to understand and appreciate the frailty of our impoverished existence that really makes it stand the test of time.